When I first started writing this article, my goal was to show the similarities between sharks and real estate agents. Mostly because I’ve heard agents call themselves sharks, but ultimately because it’s Shark Week! Obviously, it didn’t work out. So instead of showing the similarities between sharks and agents, I decided to share some incredible super powers that any real estate agent would want to adopt from the ocean’s apex creatures. 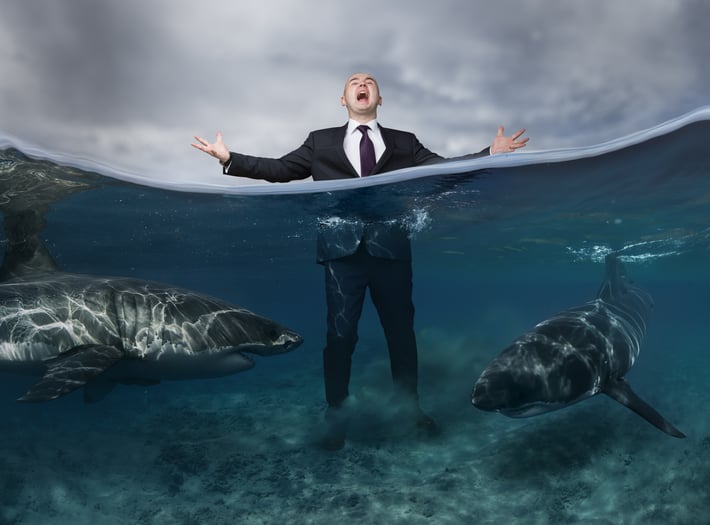 In this article, I will share 3 shark super powers that any real estate agent would want to adopt and 1 they wouldn’t.

Ever wondered why a Hammerhead shark’s head is shaped so oddly? It’s because their face is stock full of sensory organs called, ampullae of Lorenzini, that sense electrical fields of other animals. With these sensors, the Hammerhead shark can sense a human’s heartbeat from several miles away – making it the best at sensing other prey. Bonus points – due to the positioning of their eyes, they have a 360-degree view! Still not impressed? Sharks can find their way home from miles away and miles away - even in the dark. Scientists aren’t exactly sure how they do it, but they think it could be using their ampullae of Lorenzini.

Imagine if you could sense when people or objects were around. But not just sense their presence but create a visual image in your head of that person or object. If a prospect was coming to your open house, you would not only sense them coming but the outfit they’re wearing too. Even more impactful, you could actually sense the physiological changes (increased heartbeat) when someone lies to you!

If you didn’t know, the ocean floor is littered with shark teeth. Why? Some sharks can go through 30,000 teeth in their lifetime! How does that compare to humans? We have 32 adult teeth, not including our baby teeth. An average shark has 7 rows of teeth that add up to 40-45 teeth in their mouth at one time. The oldest known shark in the world is a 512-year-old Greenland shark. With 30,000 teeth divided by 42 teeth, a shark can have 714 sets of new teeth through its life. For the 512-year-old Greenland shark, it can switch out their teeth for new ones every 8.5 months!

Think about how much money you could save if grew new teeth every 8.5 months. You’d never have to go to the dentist! Knock out a tooth while playing basketball? No worries, it’ll grow back in December. Have a cavity? Knock it out like Tom Hanks in the movie, Cast Away, and grow a new one.

Some sharks have a spiracle in their respiratory system that allows them to pump water through their gills so they can breathe while they sleep. While being able to breathe while you sleep is cool, it’s not really a super power. The sharks that don’t have a spiracle to help them breathe actually don’t sleep at all. Since these types of shark breathe through ram ventilation, they will die if they stop moving forward.

Let’s omit the negative side effect of dying from this super power. How much work could you finish if you NEVER HAD TO SLEEP? (also, for the sake of this super power, let’s also assume that you won’t become delirious if you don’t sleep) You’d have all the time in the world to spend time with your family, close deals, do your hobby, learn a new language, and anything else on your to-do list.

Remember in the movie, The Little Mermaid, when Ariel trades her voice for legs? Well sharks are similar because they don’t have vocal cords! That means they can’t talk, sing, or tell each other jokes. That’s also the reason they are called, “the silent killers.” Although you might want other people to have this anti-super power.

How are you enjoying Shark Week? Leave us a comment below about your favorite shark super power, shark species, or shark fun fact!

The headline and subheader tells us what you're offering, and the form header closes the deal. Over here you can explain why your offer is so great it's worth filling out a form for.